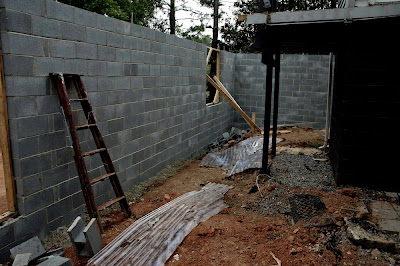 I ended the last post with a riddle. The answer as far as I’m concerned is that the new project manager, Jamie, had already been in my house without permission. I questioned him. He denies it. I have no proof except for his statement on the phone. Whatever.
I’m going to say right now that I hope these reviews get better. I pray that they do. The reason is simple. I want my house finished yesterday. Good reviews means good progress. However, the truth will be told good or bad. So there.

Today was the meeting with Jamie and the company owner, Jim. The short story is that the wifey and I decided that the project will continue.

When we started discussing the finer details of “the plan” we discovered that Mr. Hoffa (AKA, the MIA former project manager, John Riley), had some issues with understanding the plan. Maybe he has issues with integrity. Who knows?

The short story is that Hoffa must have been using some hard-core smack while formulating a plan in his head that allowed us to stay in the house. I’ve gone from liking this man to despising him for lying to us. I should have trusted my instinct. Further deviations from what was drawn and promised reveal that he’s right on par with Scott Peterson’s definition of truth. These are the plans I repeatedly made him recite back to me on numerous occasions. #@!$%@#!

I guess I should again mention, I signed the contract. It’s my fault for not scrutinizing the 9-page scripture that contained enough detail to make China’s new Olympic bird nest look like a lucky drop of the Pickup Sticks.

Back to the meeting. I was actually surprised that I managed to regain the slightest in bit of trust with ole Jonesie during meeting. I can only imagine what they were thinking when they heard the complete detail of Mr. Hoffa. The good part was that they recognized several things that were omitted from the contract. That story comes later.

The bad part came when Jamie realized what I wanted versus what I’m getting. About the wall to nowhere he said, “Now why did he do that? You don’t need that 8′ wall. We could have poured the foundation, put two rows of block and then started framing from there. It would have saved you a good piece of money.”

Baah. Money shmoney. (replace with what I really said)

As for the thought of staying in my house during construction, well… On a positive note, I now completely understand that Jamie is correct. With one bathroom, two kids, one wife and a irritated daddy, things would have gotten a bit rough when we had to use the construction workers’ port-o-let. What hacks me off is that I bought into Hoffa’s charm.

So now we have to move out until November! NO-FREAKIN’-VEMBER. At least that’s what the RC Jonesers are saying. My prediction: weather and incompetence lead to a fighting-to-get-detail-work-completed mid December move in. Merry Christmas. Goonie Goo Goo.

Coming Up: Family steps in to rescue the homeless. Confusion ensues with the project manager when I describe the concept of incentive by using doorknobs and painting as a example. The high road of trust in the form of an email. The local bank explains a loan protection policy that doesn’t sit well with the hardhat boys. And the wall to nowhere stands lonely stalwart.