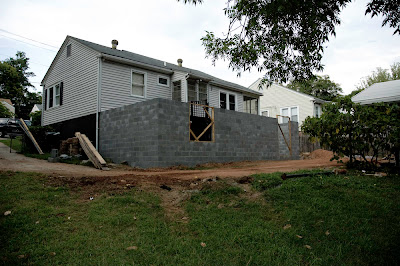 We liked our salesman from the RC Jones Company, we really did. He answered our questions. He said the right things. John Riley promised that he, specifically, would be our project manager and that we wouldn’t have to move out of our home. We do have a new baby, ya know. Moving out is a big deal. Bing, bam, boom, we signed a home improvement contact that will cost us more than the actual price we paid for the house ten years earlier. Then John disappeared.

This project isn’t so much of an improvement as it is an expansion, a massive expansion. Factor in a huge increase in property values and the service guarantees by Jimmy Hoffa and the choice was simple.
He said the job would be completed within three months of the contract being signed. “More like two-and-a-half” followed in a hush tone. No one else was in the room.

He promised that we would be able to stay in our home during the entire construction project. This was huge—HUGE—factor in going with RC Jones. We have a newborn baby girl and a six-year-old. We need a potty and a bath. We 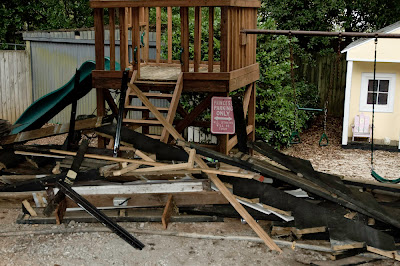 don’t need a hotel for who knows how long. It was a Go / No Go variable that seemed to swing in our favor.

While discussing the interior décor and appliances, Hoffa had the deal. He told us to go to Home Depot, pick what we want and get a quote. Take that quote to Jeff Lynch Appliances, which is a local Greenville, SC electronic and appliance store. Lynch has a policy to beat the competition by 10%. We give the Lynch quote to Hoffa who take it to his buddy at Loews and gets a competitive price break plus the contractor (en mass) discount. I would guess that RC Jones probably marks up their cost by 15-20%.

It was probably a 5%-10% discount for us, but when one is furnishing a huge new master bed/bath/walkin suite, a new kitchen and another new bathroom, at least a couple thousand would be saved. The biggest perk was that we make one shopping trip, one phone call and then turn in the quote. Hoffa would handle the rest.

The last verbal agreement involved simple changes to the plan as stated in the contract. Numerous contractors charge big cash for 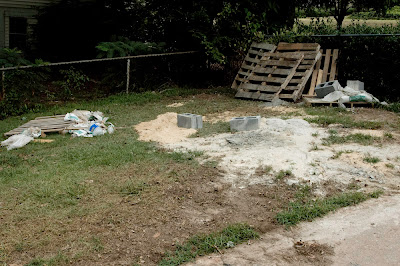 changes even if the changes come before a hole is cut or a nail is hammered. If the change varies from the contract, it’s an up-charge. Hoffa explained that he didn’t roll that way. As long as the work hasn’t been started, he said, change fees are ridiculous. Fair enough. …and on we go.

The first thing that we’d see was a big dumpster. He asked us where we’d like it. The first thing I actually saw was an expression of disbelief on my wife’s face after several weeks of unreturned phone calls. This is discussed in RC Jones Company: A Woeful $100,000 mistake?

The masons showed up about two months later and built me a wall to nowhere.

Two-and-a half weeks go by with no additional construction and three unreturned phone calls. The wife calls RC Jones and asks to speak with the owner, Mr. Jim Hale. Confusion is on the other end, and the call is forwarded to Jamie. Who the heck is Jamie? Where’s Hoffa. I want Hoffa.

It seems good ole Hoffa is no longer in the employ of RC Jones. Now we have Jamie Decker as our project manager. I called Mr. Decker the next day, furious. He answered the phone with “Uh…hello?”

I managed a three-minute conversation. His diction sucked life from my soul. 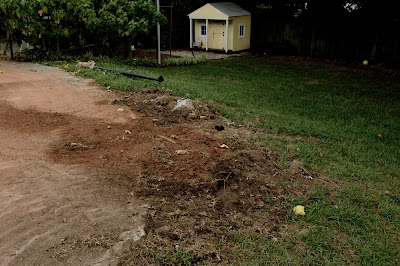 I now have one wall to nowhere, one large portion of my yard covered with an ass-load of hardened concrete and another portion destroyed by a bobcat, and I have the splinters of my demolished deck being carefully protected from the weather by my carport. I also have a meeting with Mr. Decker and Mr. Hale this coming Friday.

My Go / No Go agreements with Hoffa are now nothing more than verbal vapor. I still have no dumpster.

Coming next: My email to stop all construction on my home as well as ceasing all visitation from RC Jones to my premises until our issues are resolved during the meeting. Three days later I get a call from Mr. Decker saying that he’s at my home with his framers. He’s asking for permission to enter and take some measurements. “Yeah, uh, this back door seems open. Can we just go in that way?” Here’s what I want to know. How does a door that is unlocked seem open if it’s shut?