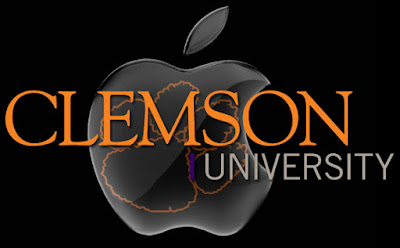 Finally! With the departure of CompUSA, the Upstate–all of SC actually–has been jonesin’ for Apple pieces and parts. Well the wait is over. The first Apple store has opened its doors on the campus of Clemson University. This is the first of a rumored three openings in the state.

As most of you can see, I’m departing from my usual photo/video blogging to bring you this news. Why? It’s simple really. Macs rock. Apple simply has the best OS on the market today. Also, access to this information is pretty easy for me. I work on campus. Oh wait, one more thing, MS Vista sucks worse than Windows 95. Yes, I am a Mac snob. You should be, too. …and on with the news. Mac users once hid in the shadows around the Tiger campus. They occasionally found a little relief in the form of help from those within the School of Education, the only people on campus who know better. Most of the time, however, computer support on campus had the standard solution to all Mac problems…”We don’t support Macs.” Oh how things change. Mac users at Clemson University are now getting a huge support…in a big, over-the-top way. Clemson Computing and Internet Technology (CCIT) has opened a retail Apple store in the heart of campus. Located in the Loggia of the University Union, the Apple store now offers all Clemson users the convenience, affordability and personal attention of a local outlet at prices even better than online or the regular educational discounts. Plus, you can receive personalized service and advising on products and features. “The goal of the store is to offer our customers the products, services and information they desire as we (CCIT) provide better support for this growing community of Mac users,” explains Jason Domke, director of CCIT’s business office. The Clemson Apple Store, the first in South Carolina, carries a full selection of Apple products including laptops, iPods, monitors and accessories. Currently, customers can take advantage of a special Back-to-School offer from Apple and receive a free iPod with the purchase of one of the recommended Apple laptops. [source ] Rumor #1 – A Store in Greenville
New store coming to Magnolia Park. This city’s site was originally planned for Haywood Mall, but there was no appropriate space. So in August 2007 Apple switched to this 670,000 s.f. town center being created after the former mall was demolished along I-85. It will include retail, retaurants, cinema, offices and hotel space on 65 acres. It would be the second-largest mall in the state, and the first Apple store in the state. Mall opens in Fall 2009. [source] Rumor # 2 – A Store in Charleston
This once-seedy section of downtown has been turned into the “SoHo of the South,” with many familiar Apple store neighbors (J. Crew, Abercrombie, GAP, Pottery Barn, etc.). The street offers 500,000 s.f. of retail and is 96% occupied. Apple reps visited the city’s Department of Economic Development in mid-2006, snapped site photos and asked about zoning/heritage approval procedures for a space renovation. Speculation is on 301 King St., a 2-story brick building formerly occupied by the Cumberland’s Pub & Grill. An architectural design proposal was submitted to the city review board on March 3, 2008. Job listings posted June 9, 2008. Could open by late summer, 2008. [source ]

For all of you Ohio State Buckeye Mac Users, feel free to download one of my latest Wallpaper designs – Mac OS X Buckeye Edition.