The Illusion of Growing Up…and a Big Tornado 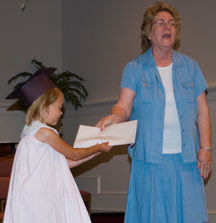 The Graduate:
I am the very proud father of a graduate. Amongst a large mix of gleaming grandparents, crying pre Ks and frazzled but pleased parents, the Overbrook Baptist Church preschoolers took to the stage Thursday singing a mix of traditionals before teachers handed out graduate certificates.

I can’t believe that at the end of this summer my little girl will be going to big school. Right now she’s on-the-books for Mitchell Rd. Elementary.

I’m still hoping for Stone Academy. We’re 3rd on the list to get in. As a graduating present, Mom and Dad gave REW her own (Wal-Mart special) digital camera. Surprisingly, it works fairly well. She’s thrilled…as am I. 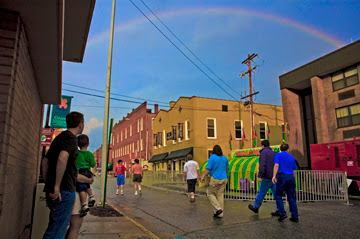 Visions or Illusions:
The things that I take for granted are amazing to me, and it’s take a child to make me understand.

The RER clan, REW and I made a quick trip to Greer Family Days last Saturday. Both Otis and I spent about $30 on $5 worth of food before spending another $7 to ride the jumpy things.

Who knew that God was about to go bowling after the first bouncing fiesta?

Our first refuge seemed great until we discovered the wind was blowing in our direction. The brick overhand didn’t help much. We then darted across to the shallow awning of the Greer Citizen.

This is where we stood for the next ½ hour making reference to Caddy Shack and joking about the citizenry of the town while rain torrents rotated to pesky drizzles and back again.

Otis the Younger learned to mimic the fearful sounds of REW after each major clap despite his daddy’s pleas to raise the arms in victory and then punch it home. Having a daughter,

it’s always fun for me when a friend’s male child exhibits girly traits.

Digressing: Most adults would wash the day with a stroke of bad luck. The treat actually came after the rain. After nearly five years of reading in various books about them, REW saw a rainbow for the first time. I think it was probably The Younger’s first as well.

Judging from REW’s expressions, I would have to conclude that the prismatic colors are both visions and illusions…at the cost of $74. 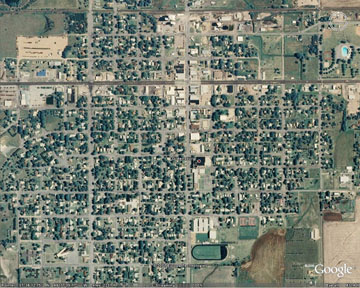 On a Completely Different Note – Before and After:
Pictures are many words, but I’m going to give you a few words anyway. If you’ve been dead to the world for the last couple of weeks, you may not have heard.

A large tornado caused extensive damage in Greensburg, Kansas on May 4th. Okay, large is a bit of an understatement. Reports claim that the tornado was 1.5 miles wide. ONE POINT FIVE MILES WIDE! 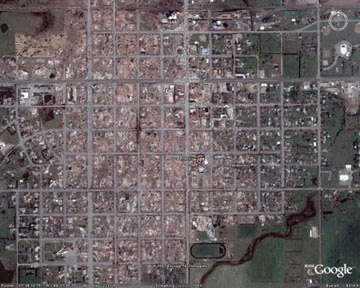 I can only imagine that it sounded like a freight train traveling through my back yard.

However, I don’t have to imagine the destructive force. These before and after photos give me a pretty good mental image.