The Church of the Golden Teapot 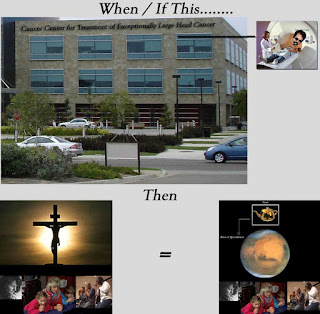 What is it about God that frightens non-Christian people?

WAIT….Before I go any further, I’m going to predict that my brothers and sisters in Christ are going to smile and appreciate this post. My non-Christian friends are going to think I’ve completely been brainwashed and have gone over the edge. Whatever—to both groups. I write to think, and not to spark opinion of others. (But go ahead and comment. That’s the most amusing part of blogging, ya know.)

“Why did [God] let Hitler kill all the Jews? He sounds like a big co*k to me.”

“He lets ONLY those who believe in him be saved? What happens to the other people in the world? Sounds like an a**hole.”

These are two of many such comments that came from the lips of one of my close friends. Another referred to my belief in my Savior as no different than someone worshiping a small golden teapot that revolves around Mars. You can’t see this teapot. You just have to have faith that it’s there, and that it will “fix” that which is broken or needed. The Church of the Golden Teapot quickly became the new name of said religion.

Now, some people might get upset at such comments, possibly even a few in the bar area of the restaurant in which we were sitting as evident by one of GROBs subdivision neighbors (or some similar relationship) commenting on the acoustic level of his rant. As for me, I respect his agnostic opinion. He has every right to question anything he wishes, but I’m certainly not going to tackle the Hitler question—or anything similar. Why won’t I? It’s simple; I have no idea.

Lets get one thing straight; I’m not one to spout scripture or give reason to seemingly unanswerable questions. I did, however, offer to explain how God works in my life and how my faith has helped my family and me get back on track. I could have given the It’s-God’s-will answer, but that would have been akin to me kicking him squa in da nuts, mmmkay.

And there is another thing. I consider GROB a great friend. He stuck beside me through some hard times in my life, and I pray for him during the hard times in his. He is also one of the funniest MFers I’ve ever known. Our differing beliefs will never deter me from our friendship.

Circling back to the question at hand, GROB is one to investigate and/or challenge everything; it’s in the nature of both our souls. But he chooses to judge the Christian belief versus investigating it. As he once told me, his attitude regarding Christianity is based on a childhood question he asked of his pastor. At age 10, he asked what becomes of non-Christians when they die. The pastor’s response made him turn away from the church and shun any further teaching of the Word of God.

Why is he (or others) afraid to go to church, listen, learn, and then form an opinion using adult rational? I want to know what it is that frightens non-believers out of the slightest consideration of attending anything with the word church as even a small descriptor of event XXXXX?

Just because you attend church doesn’t make you a Christian. It’s not that simple. The people from my church pressure no one to change/invent their faith, ever. The leaders of my church are educators of Christianity. They are Christians, too. It’s kinda like FOX; they teach and let you decide. There is no pressure from the congregation to “change your evil ways”. They are good people who love, and teach, and support. If you choose not to listen, fine. If you choose to argue a point, fine. There will be no judgment. And you’re still welcome to come to our services, meetings, family events, groups, trips, BBQs, or whatever. There is no “C” tattooed on anyone. No one questions why YOU are here. They’re just glad you could come, and then they will invite you back. I simply don’t understand from where all the fear comes.

The photo above is something that I made the day after GROB and I had our discussion. I did it to illustrate just how wrong I believe GROB’s opinion to be…And before you comment on how hypocritical I am because you believe that I am judging someone, try to remember that there is a difference between respecting an opinion and believing that it’s misguided.

~Click the photo to make it bigger. It’s certainly worth it.~

5 thoughts on “The Church of the Golden Teapot”