Bye, Bye Anna – My Time Alone Will Miss You 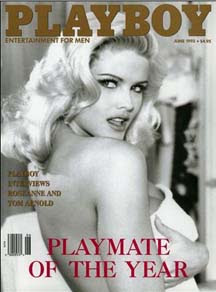 Maybe it was the whole graduation thing and the lack of my attendance at hers that lead my college girlfriend to break up with me. Or I guess it could have been my relentless harsh diatribe spewed to her roommates while reviewing a weekend spent with TB’s friends. It doesn’t really matter; the end result was the same.

But it was TB who purchased as a present for my birthday a subscription to Playboy. The year was 1992, the same year that Anna Nicole became POY.

I instantly fell in lust with her curves. I nurtured that relationship on numerous occasions during a time when my roommate, Popeye, was called out of reserve to serve the Commonwealth of Kentucky during Desert Storm. We were at war, ya know. And I must have thought that the enemy was hiding in my 501s.

I’ll never forget the come-hither look of my POY lounging in the tub and covered with bubbles. I was hooked for years; through the muumuu-like, big pink dress years and the horrid B-movies, she was my Marilyn.

As for TB, going out to dinner with her parents after her college graduation just didn’t appeal to me at the time. Maybe I should have called instead of standing them up. And I didn’t know she was in the other room during my diatribe.
She broke up with me for the guy to whom I subleased Popeye’s room. She married him.

3 thoughts on “Bye, Bye Anna – My Time Alone Will Miss You”