Of Nothing In Particular

Coming Soon: Death of the Arcade; A Photo Essay If you were a teen or pre-teen in the 80s and shoveled what seemed like millions of dollars, one quarter at a time, into the likes of Tempest, Defender, Asteroids, and other such earth-shattering advances in modern technology, you’re going to like this photo essay. 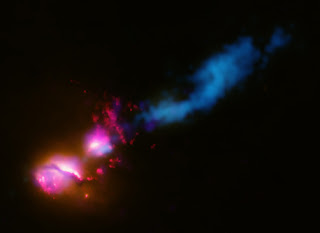 One last thing: Have you ever seen one galaxy punch another? It’s a bit hard to comprehend (and explain), but you can see the photo to the right.

A jet of particles generated by a supermassive black hole at the center of the main galaxy (blue) is striking the companion galaxy. The jet is disrupted and deflected by this impact.

I think often about the nearly unimaginable size and nature of the objects within the universe. I also think often of my little girl and the nearly unimaginable complexity of the human body. If that’s too much for you, maybe just start with the complexity of, say, just one eye…or your big toe…or your response to a cold…or the processes in the body that happen after you get a paper cut.

From what I was taught in school, it all started with a really big explosion. Bing, bang, boom, eight gazillion years later I’ve turned from a piece of carbon to having the intelligence to write/post a blog.